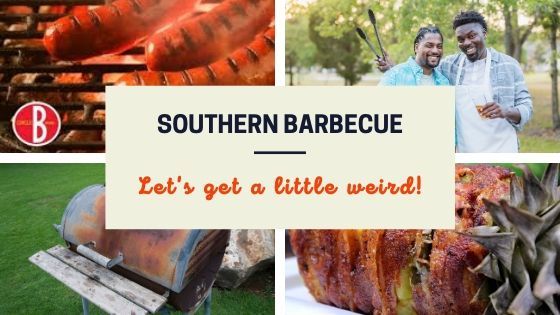 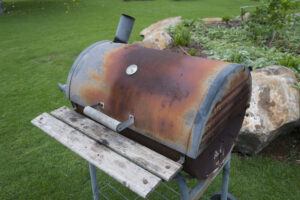 You get up with the sun – or try to beat the sunrise in some cases. You line up the wood or charcoal just right in your pit or smoker. If you’re like most of us southern meat masters, your barbecue is going to consist of chicken, ribs, and pork shoulder. And let’s face it – unless you want to get slapped by your Aunt Cecilia, you better throw on some Circle B smoked sausages, or it just ain’t a real barbecue.

So while you’re making up your sauces and dry rubs from scratch, you might also want to consider that today’s professional pitmasters are starting to grill things you never thought of grilling.

Sure, you’ve got to have traditional fixins to go with your meal, no doubt. But here are just a few new trendy dishes you never thought you’d fix that just might make your barbecue the most memorable of the summer season.

Bacon – and fruit. On the grill. Together. Huh?

Bacon – what doesn’t it make better? But everyone knows fruit has no business taking up valuable grill-estate during a true southern barbecue. Or perhaps we can convince you that it does?

There’s a new trend afoot that you ought to just be brave enough to try. And it’s called a “Swineapple.”  Simply put, it’s a whole peeled, cored pineapple, stuffed with pork, and liberally wrapped in delicious fatty bacon. 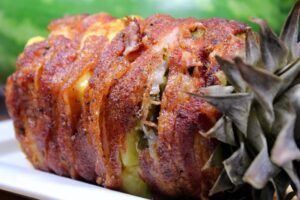 Now that you’ve stopped laughing at the name, let’s talk about how to create this concoction. It doesn’t have to cook as long as the rest of the meat you’re preparing – it only takes about 45 minutes from start to finish.

We recommend you pre-cook the pork you’re going to use to stuff into the pineapple – this cuts down on the cooking time. You might even drizzle some of your homemade barbecue sauce on it right after you’ve wrapped it in bacon.

And speaking of the bacon – don’t be shy about wrapping plenty of overlapping bacon around that fresh juicy pineapple. Keep it in place with a few soaked toothpicks or skewers, and throw it on the grill or smoker until the bacon gets nice and crispy.

Even if you have hard-core barbecue traditionalists in your crowd, no one’s going to doubt you again when you slice that thing up and pass it around. One bite and Darryl, the next-door neighbor, is going to be kicking himself for not thinking of it first.  Here’s a good recipe you might use to impress your family and friends with your new-fangled barbecue favorite.

Mac and cheese – a favorite side dish for a table groaning full of side dishes that complement all that meat.  But here’s a twist to an old-fashioned favorite.

Mix up your favorite family recipe of mac and cheese (make sure you use a disposable aluminum pan.) Don’t even bother heating up the house with the oven – just pop it onto the grill or smoker when everything’s about 45 minutes away from being done, and let it cook until nice and creamy on the inside and just slightly crispy on the outside.  In other words, set it and forget it.

Ok – yes, you might get some strange looks, but the flavor will convert even the most particular barbecue guest with its cheesy, smoky goodness. Makes my mouth water just thinking about it.

Don’t mess with their desserts.  Unless it’s pie. Then mess with it.

This might be the craziest thing you’ve heard of yet – smoking a pie. Smoky and earthy flavors of a smoked pie cut the sweet just a bit and will absolutely beg for a scoop of freshly churned homemade vanilla ice cream.

We recommend trying this with pecan or even buttermilk chess pies. Now, you may have to pry the raw pie outta somebody’s hands to try this, but after trying the Swineapple, you might make a believer out of the designated dessert maker.

The trick is to put the pie right in the middle of the grill or smoker so it cooks through and through. It needs to grill for about 45 minutes, or until a toothpick inserted comes out clean.

They say you need to let ‘em sit until they’ve completely cooled, but honestly, does that ever happen? Somebody’s uncle is going to start with dessert first, and that ooey-gooey goodness is gonna pique the curiosity of the rest of your crew.

And the naysayers can always stick with the home churned ice cream – more pie for the rest of us.

Be adventurous. Be the hit of the summer barbecues.

There are plenty of other things you can barbecue if you just get up the nerve.  For example, some pitmasters like to grill ketchup and mustard (can you imagine this drizzled over your Circle B smoked sausages?) But start your crew off slowly. Make sure there are enough traditional fixins for those not brave enough to try your new culinary creations. 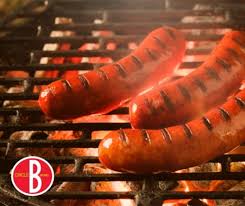 So if you really want to be the talk of the summer, take a leap of faith and try your hand at some of these less traditional goodies. Blow everyone’s minds with your creative mix of old vs. new.  Who knows – people may be begging for Swineapple at your next barbecue – or better yet, copycat you at THEIR barbecue. After all, imitation is the sincerest form of flattery! Chances are slim that there will be many leftovers –  just make sure Darryl doesn’t try to sneak the Circle B sausages home in HIS Tupperware!

Circle B: a decade of Memphis roots and Southern smoked sausage

After decades of gracing Memphis barbecues, restaurants, and home tables, Circle B is the #12 sausage brand in the entire country.

When fall comes around, people get up to the same old…

No football? No problem! Your own backyard tailgating adventure awaits

So college football is looking a little different this year. Many…

We use cookies to ensure that we give you the best experience on our website. If you continue to use this site we will assume that you are happy with it.Ok